Effigy and angels, from the tomb of Philippe le Hardi, or Philip the Bold, 1342-1404, (Philippe II, duc de Bourgogne, or Philip II, Duke of Burgundy), 1381-1410, by Jean de Marville, d. 1389, Claus Sluter, 1340-1405, and Claus de Werve, 1380-1459, in the Grande Salle du Palais des ducs de Bourgogne, or Salle des Gardes, a 15th century Flamboyant Gothic hall, in the Musee des Beaux-Arts de Dijon, opened 1787 in the Palace of the Dukes of Burgundy in Dijon, Burgundy, France. The tomb consists of a painted alabaster effigy with lion and angels, and below, figures of pleurants or weepers among Gothic tracery. Jean de Marville was commissioned in 1381, and Claus Sluter took over in 1389 after his death and produced startlingly realistic sculptures. In 1404, and Claus de Werve took over and finished the work in 1410. The effigies were painted by Jean Malouel, 1365-1415. The tombs were originally from the Chartreuse de Champmol, or Chartreuse de la Sainte-Trinite de Champmol, a Carthusian monastery which was sacked in the French Revolution and the tombs moved to Dijon cathedral then here in 1827. The effigies are 19th century reconstructions, the originals being destroyed in the French Revolution. Picture by Manuel Cohen 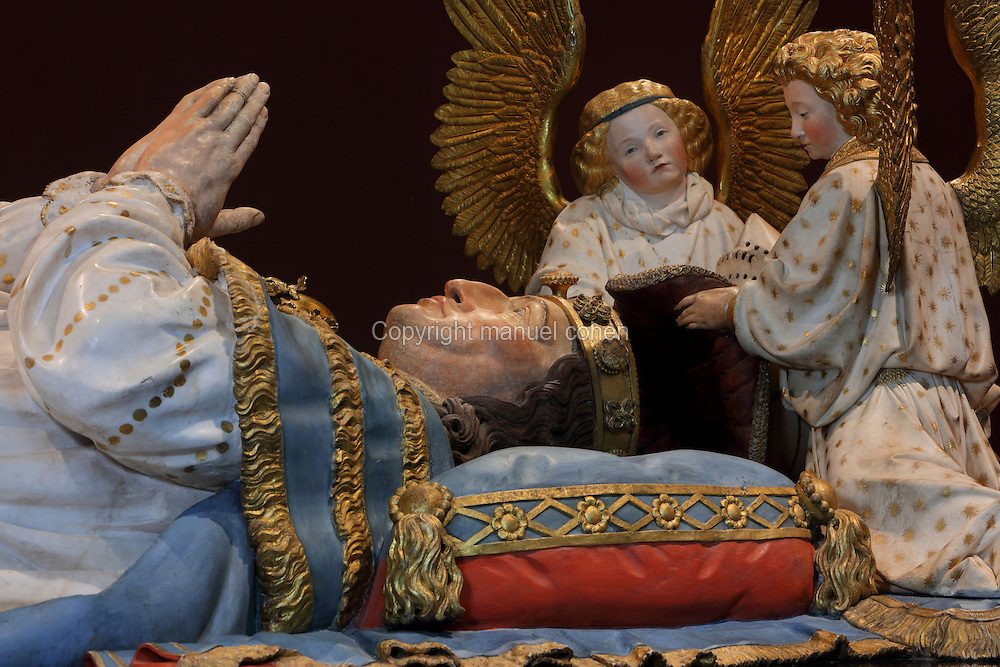